HOLY CRAP I WON THE RACE!

I’m not sure I really need to write more of a race report than that!  I’m honestly still in shock and confused about how I won.  I raced in Intermediate Women against women that scared the crap out of me last summer at the Laramie series.  I was racing against the girl that always beat me in the Laramie races.  Hell, I wasn’t racing beginner.  So how why huh… it’s still processing in my head.

So back to the start… I originally registered in the beginner’s class, then I realized I wanted to race for longer than 25 minutes and longer than 3.5 miles.  So I bumped myself up to the Intermediate Women, and figured I’d give it my best shot.  I practiced the technical parts that give me trouble on the course, and wished for the best.  With 18 registrants, I hesitantly decided on a goal of a Top 10 finish.

The course ended up having a few changes that I overlooked on the tiny course map.  We would start on two-track equestrian trail, cutting out about 1/3 of the technical Stone Temple Circuit singletrack.  And instead of Ignouramus, we would have to hike a bike 2%.  I found out about 2% the night before, and was kinda freaked out because I had never been on the trail.  I did about a mile of warm up on the two-track start, and my legs felt strong.  Unfortunately, it was super windy, and it was cold.  So I knew I would be battling wind.

Amy and I were too busy chatting and made it to the start about a minute or so before line up.  I positioned myself in the second row.  Start went off and soon I was at the front on the first climb.  Not unusual, I’ve been there before just to have the entire field fly past me 30 seconds later (ahem, Battle the Bear, Rumble at 18 Road, hell my first ever race in Laramie last summer…).  Oddly enough, it didn’t happen.  Ok, cool.  I kept it in a granny gear, and hunkered down against the wind and just spun.  A 1st City Cycling Team girl (Gretchen), passed me, and I ducked behind to draft roadie style, knowing it was saving some energy in the terrible wind.  Didn’t last for long as I got impatient and retook the lead. Sam, a fellow Fort Folly, took my lead and I glued myself to her back wheel, and we hit the singletrack on Stone Temple Circuit.  I was damn happy to be second onto the singletrack, as passing chances are super rare.

This is when I discovered that riding Stone Temple Circuit with a huge group of people sucks.  What I can easily clear by myself becomes a traffic jam when noobs or those unfamiliar with the trail stop/fall/whatever.  I was getting annoyed.  Gretchen, Sam, and myself separated ourselves as the lead women’s pack, and we were battling the stragglers of the Intermediate Men class.  One guy couldn’t power over a tiny dirt hill, log jagging the rest of us.  I jumped off my bike and sprinted past him, just to get hung up on the next technical feature because I wasn’t clipped in and didn’t have enough speed.  I was in 1st, and dammit I wanted to stay there!

Bobbles and stops aside due to other racers, I held my lead on the descent of STC.  I really was in awe, and yelled to Suzie as I passed her “I’m in first, and I don’t know why!”  I came into the start/finish area, momentarily confused by all the cones, and sprinted back up to speed.  I prepared myself mentally that I would probably get caught on the second, longer lap, but as long as I maintained a podium spot I would be happy.  I honestly questioned my stamina and technical prowess I would need on 2%.

Strangely enough, I found myself without someone on my wheel going onto STC.  I continued to catch and pass the Intermediate Men racers, this time with a little better luck.  Only anger moment happened when a guy bobbled on a 5″ high rock and just stood in the middle of the trail as I was flying down.  I started yelling “Move please…move… MOVE MOVE MOVE” followed by a sweet “Thank you!”  LOL.  Just was hard, as I was trying to widened my lead, and this guy was apparently unaware that some people were still racing a race.  OK, now I know how other racers feel when they zip around me and get frustrated.  I definitely won’t get as offended now the next time someone yells at me “that’s the 1st place guy ahead of us, move out of my way!”

I reached the cut off to Ignouramus/2%/Rock ‘n Roller.  Evan let me know I was the first women through.  Powered up the climb and leaped off the bike for my hiking section (what is this, a dualathlon?).  A guy racer praised me, saying he would love to have my climbing stamina!  Likewise, I would like to have his downhill skills, but I’ll take what I have!  After getting my bike pedal stuck on a rock and yanking the bike until it came loose, instead of being a rational person and lifting it up, I was off of 2% and cruising on Rock N Roller.  I heard Gretchen not too far behind, so I knew she had made up some time.  Rock N Roller is sketchy and loose, so it was hard for me to really haul through the corners.  Not to mention the wind was there again.  Gretchen was on my rear wheel as we jumped off to the hike the “overlook” portion (seriously, there’s a “go around” for this… why didn’t race promoters use it?).  I jumped back on and pedaled like crazy, relieved no one was in front of me for the technical downhill of Ignouramus to STC.

Final corner of STC to the downhill, down home stretch I heard Gretchen say behind me “OK girl, this is it!”  I knew she couldn’t pass me on the single track, so I played it safe, not wanting to crash out.  Up and over the cattle gate, 90 degree turn (argh) and there was the finish oh so close.  I stood up and sprinted, giving it everything I had.  Cross the finish line, and pumped my fist in the air like I’ve always wanted to do.

Gretchen and I immediately hugged and congratulated each other.  Awesome race, awesome competition.  Sam rolled in at 3rd place.  Someone thanked me for not entering beginner.  And the whole time I was like OMG OMG OMG. 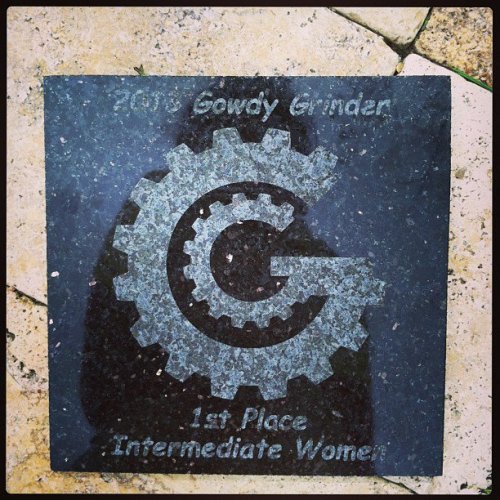 I talked to Dewey (he told me “nice bike” but not to tell anyone he said that, whoops!), and he said it’s time to race advance.  I kindly reminded him the LMBS is still a combined intermediate/advance women’s class 😛  We laughed about how last year to the day I hesitantly rode off road for the first time, scared and timid and now I just won my category at the Gowdy Grinder.  Someone else joked that I sandbagged intermediate and I’m like….nooooo.  Haha.  I had no idea!  Maybe it’s the 750 miles I’ve pedaled since January 1st, or the bike, or the fact these are my home trails… I dunno, I still don’t know the answer.  Wendy says it’s because I’m good on a bike.  I still don’t believe that one!  I will admit to being a great climber, though!

If anything, this race and win was a massive confidence boost!  It’s nice to have a win that was actually a win, and not a default/easy one like Ridgeline Rampage.  The field was 15 strong, so that is 14 other women I beat!  It also makes me feel a lot better going into the LMBS in June, and hopeful for future races!

Leave a Reply to My Little Vegan Cancel reply