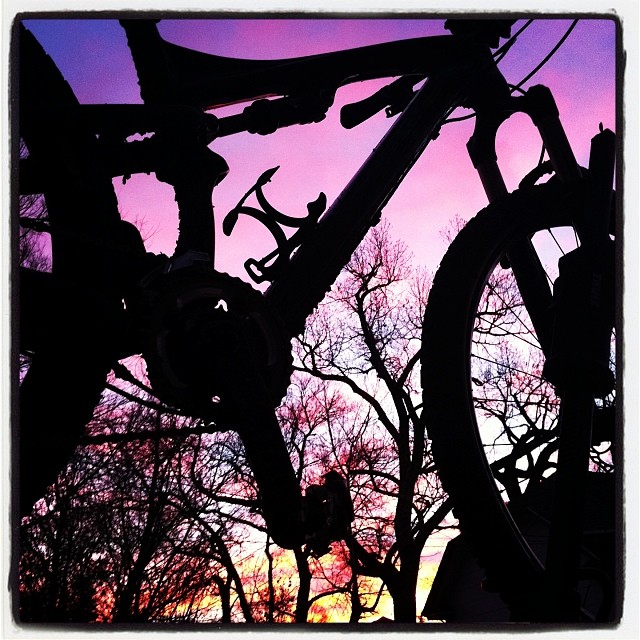 It’s once again May 15th – my anniversary of beginning to ride a bike (as an adult).  Some days it feels like May 15, 2012 was a million years ago, some days it feels like it was yesterday.  And here I am, wrapping up year two of this crazy journey I’ve been on, still turning the pedals over and over.

Some days I wonder when my attention span will run out.  When will turning those pedals over and over not be fun?  When will l finally get fed up of always looking like I was in a bar room brawl with my knees and elbows?  When will I mentally break down and decide I can’t spend another minute training for something where there will always be someone that much faster?  When will I finally realize that my bikes are becoming more and more related to that ol’ race car project sitting in the garage – the chase for lighter, “better” components, this type of carbon fiber for that type of carbon fiber, the swiping of already tired out credit cards?

And yet my motivation surprisingly remains there.  It’s a part of life. It’s really no longer about weight loss and the physical fitness – I won’t lie that I’m 10 pounds heavier at this present moment than I was 1 year ago, and about the same weight as when I swung my leg over that bike 2 years ago (though easy to argue that the makeup of my body has dramatically changed).  The hours on the trainer busting out intervals are so ingrained in my routine that I’m continuing them through the outdoor riding season.  I crave the next opportunity I have to get on my bike, to make my heart feel like it’s going to explode, that uncomfortable tingling feeling in my legs that tells me I’ve pushed my muscles to the max, to feel my lungs struggle for every oxygen molecule.  Hell, it’s not a craving its an addiction.  I’m an addict chasing her next high, whether it’s on pavement, gravel, single track, or rocks.  To feel my physical being ripped apart by demanding it to do things that perhaps aren’t really meant for an average women at age 30 to do.

Mentally I realized that I can make myself do more things than I thought possible.  I still struggle with the mental game, knowing that my brain shuts my legs down far before anything physical does, but the excuses remain.  Mental weakness isn’t easy to admit.  I’m still chasing the demons that plague me – my brain not being able to cope with the 195bpm heart rate, the stinging in my legs, the fact that hills just suck, that this rock drop could paralyze me, and that falling hurts a lot. But the demons don’t win as often.  They get shut down a lot quicker these days.  And when they get the best of me, I’m one pissed off gal.  Almost a year later, and I’m finally coming to terms with what happened at the Laramie Enduro, and I fully recognize that that was a mental failure, not physical, and dammit, I want to do that damn race again just to prove that I can finish it, whether I’m crying or not.

Personal opinions of the man aside, one of my favorite quotes is Lance Armstrong and this: “Every world class athlete is running from something.  Every one is pushing to get somewhere else.”  I’m not close to being a world class athlete and probably will never be, but I am running from stuff.  Cycling is my therapy.  Whether is pedaling out the stress of my career as a nurse, pedaling out the anger of failed relationships and friendships, the frustration of always being pulled in different directions, pedaling out all the times people have told me I can’t do something or that I shouldn’t do something… it’s just me and that 20-something pound hunk of carbon, metal, and rubber.  I’ll have big mental conversations with myself, I’ll curse and swear, I’ll cry.  And usually 95% of the time I get off the bike feeling better.  That’s something I didn’t have a few years ago, and perhaps that is one of the better things cycling has done for me, giving me a change to work through the mentally challenging aspects of my life in a positive manner when so many others may turn to self destructive means.

Rambling aside, here I am, pedal over pedal.  Still at it.  I didn’t know two years ago what today would be like.  I was just planning on putzing around on that heavy mountain bike, maybe losing some weight, and giving me something fun to do on the weekends.  I didn’t know that two years from the very day I’d go pound out a “short” afternoon road ride on my pretty sweet black and pink carbon road bike, get a Strava QOM or two, and be planning some crazy 80-mile adventure for the weekend.  I didn’t know that I’d be looking forward to racing in Iowa later in the summer, or hopping barriers at cyclocross in the fall, or planning the big step up to Cat 1 mountain bike racing.  I guess that’s the beauty in it all, I didn’t set out cycling with any sort of idea in mind about what the future would hold.  When I built the magical race car of mine, the goal for the future was already set in stone and there were expectations to withhold, and that’s the been the perk to cycling… though there might be goals, there’s no one set “must accomplish” thing.  I go with the flow and see what new experiences arise.

So here’s to the start of year 3, to new experiences, new scars, hopefully no new rear derailleurs!

I’ve turned the pedals (give or take a smidge) 4,175 miles in these two years and have 341 rides uploaded to Strava, for some fun facts!  My longest ride remains 100.3 miles, which was the 2013 Ride for Sight Century.  I’ve owned 7 bikes in this time, and have only sold one, which ironically is the very first bike I bought, my ’12 Giant Rainier.  It was also the only bike that wasn’t Specialized, go figure.  I’ve only gotten rid of two pairs of bike shorts, and that’s because they got so baggy from weight loss they wouldn’t stay up.  And it took me up until last month to finally agree to try tubeless mountain bike tires.  To top it off, I’ve made so many awesome friends that I wouldn’t have if I wasn’t a crazy cyclist.  So there’s that!

1 thought on “Two years and counting…”