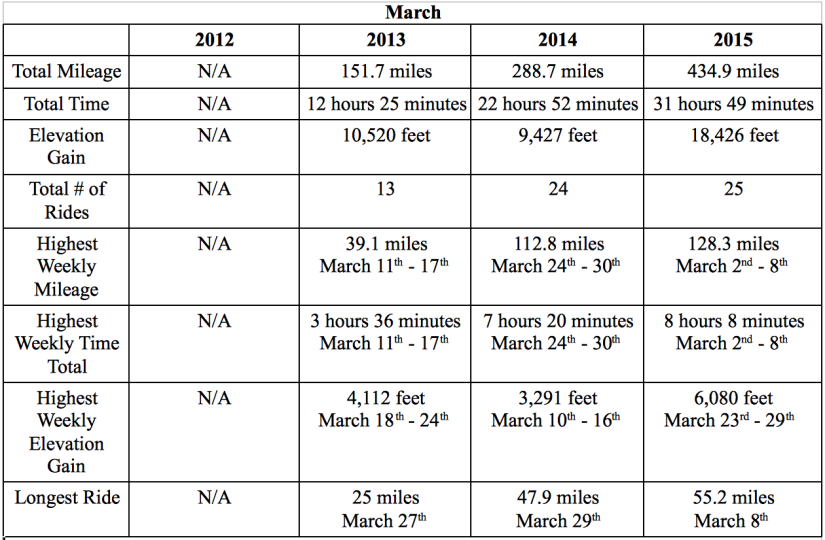 I missed this being my highest mileage month by 6 miles, whoops!  Which is kind of impressive, since my week in Seattle wasn’t high mileage and the week following I was knocked on my butt by some severe respiratory virus.  Of course, you see the difference in the amount of time, which hey, still isn’t too shabby at 31+ hours.

March was a struggle for me, I won’t lie.  I did have two good early starts to my “road race” season (I’ve never considered myself to have a road race season before this year… I’m doing a significant amount of road stuff this spring, however, when compared to previous years), and am super proud of my effort during the Oredigger Classic Hill Climb up Lookout Mountain.  Otherwise, my training wasn’t exactly on target.  I think I ended up feeling more tired than usual, and then I picked up that virus during my Seattle trip and that was the fork stuck into me saying, “you’re done!”

I managed to get out to Hewlett Gulch last weekend for a short mountain bike ride to test the lungs.  I had a good time, minus the one crash, and realized my technical skills aren’t as rusty as I thought.  Then Sunday, Jim and I climbed up to Estes Park – a ride we’ve been talking about foreverrrrr.  So fun to finally get it done!  I took it easy in order to not stress my body, and we battled a headwind descending which is always a buzzkill.  I followed up with a decent after work ride on Monday, and an amazing evening yesterday at Gowdy on the mountain bike.  Rode some trails that I haven’t done in a long time, and after about 10 miles run into some of my buddies so I chatted it up for awhile, and then did another 2.6 miles with them.

I’m struggling with mountain bike fitness.  The short punches of power and climbing just seem to do me in… but luckily there’s starva to compare my results and I’m actually kinda kicking butt.  I guess it’s true… it never gets easy, you just start going faster!

Unfortunately today I’m back to feeling really crappy and have developed a cough, so I wonder if I overdid the past few days.  My mental status isn’t the best… I’m feeling worn out and burned out.  A lot of little things that shouldn’t bother me have started pissing me off, and I’m finding myself really irritable.  And I’m looking at my race schedule and seeing what I can subtract… something that never really happens in March!  I already nixed Rumble at 18 Road for this year.  The cost + lack of exciting course + really no reason to do it did that race in.  Which is fine, because it opened up to two local options for me… the road race in Johnstown and the following weekend Ridgeline Rampage, which I’ve decided I will race the “marathon” 50 mile distance… in… wait for it… the pro category.  I’ve come to the realization that I’m racing pro/open in everything this year except the two USAC races I’ve entered due to my cat 1 license (and of course the races like Leadville where there are no categories, just age groupings), so I might as well just make it pro/open across the board in non-sanctioned races.  Screw it, go big!  At least I can’t bitch about sandbaggers when I’m in pro/open, ha!

But yeah… I’m trying to reign in some of my negative feelings.  I just don’t want to look back on 2015 and regret the things I missed out on because I was so married to a training schedule I couldn’t “cheat” a bit.  I want to climb a 14er by using my feet (I’ll do it on road bike in July), I want to go fishing in Flaming Gorge, I want to have some fun adventures.  One of the things that adds insult to injury to last year’s cyclocross season is how many fun fall mountain bike adventures I missed out on because I was dragging myself to races when the people who invited me were off for epic 30-50 mile adventures off in the mountains.  I don’t want to repeat that!  I don’t like how I’m feeling so burned out before I’ve even started racing, so I’m partially in panic mode and partially in a “I give up mode.”  I want the bike to be a happy place, not another job I go to after my day job.  I want to smile and whoop and holler at races at the joy of just being able to race my bike.

So here’s to April is a happier place for me on and off the bike.  Flowers are blooming, the sun is shining, and the trails are scary dry, so there’s hope!