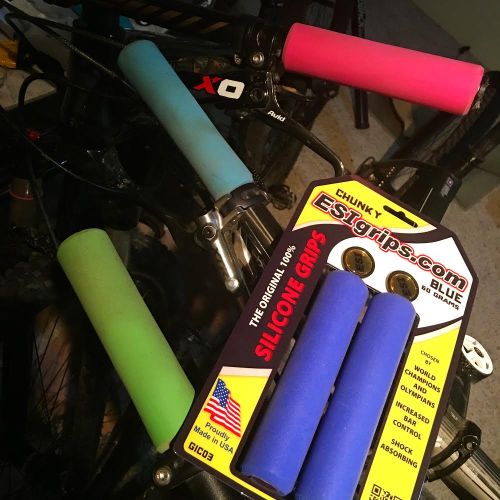 Over the years I’ve been sporting all sorts of looks on the ends of my handlebars… usually several different ones a season!  Grips are, well, a VERY important part of your bike, but I think sometimes we can all overlook them in the grand scheme of things.

It shouldn’t be a surprise anymore that I choose bike stuff based on color.  Hell, that’s why I bought my first mountain bike – it was pink!  If I’m suffering on something, I at least want it to be visually appealing 😀 So usually my grips were chosen based on color.  OK, that worked… except as I progressed and refined my riding style and learned that color aside, the shape of a grip can determine how comfortable it is.  I started out with ergonomically shaped grips.  Which are great… but I rolled my wrists under while climbing.  Yes, I know, it’s “bad.”  I’ve had a spectator at the XC National Championships even comment on it during my race.  But it’s how I ride.  It’s how I climb.  Have you tried doing that on ergo grips?  Yep, doesn’t work so well, and I ended up in wrestling matches with my grips instead of focusing on climbs.

OK, next step after I ditched the ergo grips for stock grips, which I promptly wore out in months.  Normal round grips that are colorful for 2015.  Purple and teal, my faves!  Until I rode in wet conditions, mud, or sweaty hands.  Slip would go my hands, even with gloves on.  Hmmm.  Also in 2015 I stepped up my hours on the bikes (road and mountain), which lead to some pretty bad ulnar nerve damage.  When I would sleep my ring and pinky fingers were curl up and I couldn’t straighten them, that’s how bad!  Though a combination of factors were at play (increased hours, switching to non-padded gloves), the hard plastic grips I were using had to go, especially before some of the longer endurance MTB races came up.  I had seen ESI Grips while watching World Cup replays, and was curious about these squishy colorful grips.  My “super awesome pro” friend Suzie had a pair on her single speed that I stole for a test ride, and instantly I was hooked on ESI!

And so began the love affair with these colorful silicone tubes made right here in the good ol’ US of A.  The ESI Chunky silicone grips conform to your hand enough to provide some extra padding and also comfort, and is also grippy when wet or sweaty.  I won’t lie, it took me days to slid a pair on my hardtail millimeter by millimeter (single speed and full suspension bikes went much easier… alloy vs. carbon bars maybe?), but the effort was worth all the grunting in the bike room with Windex!  Soon my Epic was rocking the bright pink, my Fate the aqua blue, and the single speed Superfly neon green.  Finally I was styling AND comfortable!  I finished out 2015 riding in style, and finally learned the importance of not overlooking the small, but important details on my mountain bike that affect handling and comfort.

The discarded grip pile will not be added to anymore, and I couldn’t be happier!  I’m also super excited to announce that ESI Grips will be supporting my 2016 mountain bike race season.  But that doesn’t mean I’m just saying nice things for the sake of the sponsorship – I was using, and was going to continue using, ESI Grips regardless!  There’s a reason why you find them on handlebars everywhere from World Cup podiums to local weeknight “world championships” – they’re a great product that simply works!