Goodbye off season!  I decided last fall I would give the USAC Fat Bike National Championships a go since Ogden is close and I owned a fat bike.  I was still in my “I hate this crap” mode about fat biking, but as winter has gone on, I fell more and more in love with being out in the cold and snow riding my normal trails on big ol’ tires.  I decided I wanted to target nationals as a “B” race for the year, and really try hard for the best result I could give.  So there I was signed up for both my masters women 30-39 race and the women’s pro race, which were two hours apart.  30 miles, couple of hours, and snow!

My parents joined me for the trip, which was a nice change from lonely and long drives and eating out alone (a huge fear of mine).  I picked up my new 2016 Salsa Beargrease Carbon on Wednesday, and gave it a nervous and quick spin up at Happy Jack before we left for Ogden on Thursday morning.  The drive was uneventful, with 75 cent cones in Little America, and a relief for me that for once I could just sit and stare at the scenery vs having to keep my eyes on the road!  As we approached Ogden my excitement grew and grew as I took in the mountains.  Yay, it’s time to race bikes!

Friday morning we made the drive up to Powder Mountain for a pre-ride.  The course… well… it’s the not the variety of fat biking I do.  I do tricky, tight single track.  The nationals course was what felt like 20 feet wide highway, and aside from a very very short “single track” section wasn’t tricky at all.  There’s a couple of berms, but I made the decision I wouldn’t ride up on them as it wasn’t worth the risk to my result.  I’ve biked enough in the snow to know what’s risky and what’s riskier.  The course starts with a fast downhill – 30mph fast – with a few punchy climbs before more fast false flat sections.  Halfway you turn and start climbing.  I’ll hand it to the course for having some serious climbing.  There were about 3 or 4 super steep pitches and then otherwise long climbing grinds.  I pre-rode in the granniest of granny gears to save my legs and developed a massive side ache that typically comes after not being at altitude for awhile, which didn’t make sense because Happy Jack is the same elevation and I had just rode there.  I blamed it on the hotel breakfast croissants in the end.  I finished up the pre-ride and called it good after one lap.  The new bike felt amazing, almost like being on my S-Works Fate on dry dirt with it’s responsiveness.  I had the tires set up tubeless, and that definitely helped make pedaling seem more effortless.  The 45Nrth Husker Dus hooked up good in the mushy snow conditions.

We headed back to Ogden and went to packet pick up and the little expo where I made some connections, and bought some amazing neon pink Specialized gloves that matched my kit, and got my numbers.  They would end up giving me the wrong number plate for my amateur age group race, which I realized in the morning.  Ugh.  Glad I caught that one!

My parents and I arrived early on race day to secure good parking and to just make sure we made it nice and early.  It was cold, in the 30s, with a chilly wind so I mostly sat around in the truck, until I went and got my correct number plate.  I warmed up with a few hard sprints on the starting stretch, and then back on a long steep climb to the parking lot.  I settled for a thermal base layer and thermal jersey on top, thermal tights under my bibs, wool socks, chemical toe warmer packs, my Sidi Ghibli shoes, and big ol’ Pearl Izumi gloves.

They started all under 40 age group women together.  It kinda sucks as they gave us 15 seconds after call ups before the whistle, which left several racers in a bind as they tossed off their coats.  I had a strong start from the second row, and quickly found myself out front with Ami (eventual winner of 30-39), and a couple of juniors.  Ami and I quickly gapped the field.  I didn’t know what age group she was in, so I tried to stick to her wheel.  We got hung up a bit by some male racers in the single track portions.  Once back on the “highway,” she looked behind herself and saw me and powered away like nothing.  It didn’t faze me, as I was feeling strong and was trying to get away from whoever might be behind us.  I hit the climb and felt super strong.  I would go on to do this race 99% in my big ring, only dropping down to the small ring on the 3 steepest pitches.  The first lap would largely be about passing the men that I caught.  I would remind myself to shift into a tougher gear and keeping putting down the power, and it was working.  Whoa, training might’ve worked a bit?!  Luckily I didn’t have any stomach or side ache problems, and seemed like my body was responding positively to the effort at nearly 9000 feet and 180bpm heart rate.

I came around for my second and final lap of the race and it seemed that aside from any catastrophes I would finish as the 2nd overall amateur woman, and unsure where I was in the age group breakdown.  I flew down the speedy parts, and reminded myself to be calm and careful on the softer parts in order to stay upright.  I would fly up all the climbs once again, only 8 seconds off my time from the first lap!  Yay, consistency!  The wind was starting to pick up, and seemed like a headwind in every direction, so I was pleased to be nearing the finish.  I shifted down and sprinted across the line with the biggest smile!  2nd overall amateur women at 1 hour 5 seconds, and I would be 2nd in 30-39!

I am completely happy with my results in the 30-39 race, and I really cannot think of anything I would’ve or could’ve done differently.  The winner was super stronger, and definitely way stronger than I was (and with the advantage of racing here before), but I feel like I gave 100% out on the course and had the perfect race that I had imagined for weeks and weeks while training.  But damn, I was exhausted.  Back in my parents’ truck I whined that I didn’t want to do the pro race, and pretty much just sat there, and only sipped a protein drink.  Finally with 15 minutes to go until the pro race I quickly changed out my base layer and jersey, and threw on lighter weight gloves, and headed down.  I reasoned with myself that I could pull out of the pro race if I had to.

I had the last call up in the race of 6 women since I don’t have USAC mountain bike points (and was the only cat 1 in the pro race).  Lonely little me in the second row 😦  The start was NOT fast at all… the amateur start was way faster!  I found myself off the front, which I giggled about.  Here’s me with already 12 race miles in my legs, and I was off the front in the pro race.  No worries, soon the group would swallow me and I took to drafting in the horrid winds that had to be blowing 20-30mph at this point.  5 of us would stay together going into the halfway point of the first lap and into the climb.  Then it would be Rebecca, Porsha, and I.  I could feel my previous race in my legs, and figured I would just try to hold onto 5th place, because according to USAC when I registered, that would be a podium spot (and we all know USAC does what they want in the end, so the podium was only 3 deep when awards came around.  Thanks USAC).

Up up up in the horrid crosswinds.  Gusts would hit me and I would come to a stand still.  But I still cleared the climbs and stayed on my bike.  Came around feeling actually pretty good into the second lap.  This would be the lap where the pro men leaders would lap me and I joked coming through for the 3rd lap that my race should be over… I was told “you don’t get off this easy!”  Off for my 3rd lap in the freezing cold wind.  My gloves were a poor choice and my fingers were screaming.  At one point in the pro race my lips actually froze together!  My face burned from being blasted with icy snow.  My stomach was growling, and I ate a gel and chugged down my bottle of Tailwind, hoping I survived.  “Well, I’m in neon pink, so I’ll be easy to see…” I thought, thinking about my impending face plant into a snowbank from starvation.  “How the HELL is Kayley in short sleeves?” I wondered another moment.  “I hate my pink gloves.  They’re so cold”  “This is NOT as bad as Leadville, this is NOT as bad as Leadville!”  “Oh god, I’m going to miss my podium if I don’t hurry up!!” 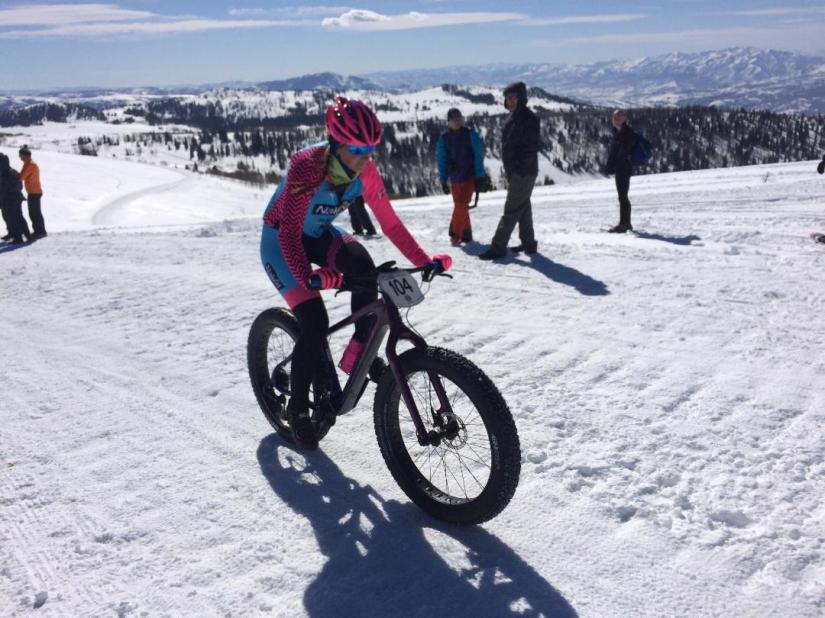 On the third lap I caught Porsha’s wheel on the climb and it was a relief to see her struggling in the wind.  Sometimes I think suffering is easier when you realize everyone is suffering!  On the first steep pitch we both kinda “blew” off our bikes into soft snow and had to walk/run/shuffle up the hill before remounting.  This is where Porsha would finally pull away, which I knew was ok as I never had the gas left in the tank to really stick to her wheel and launch an attack for 4th place.   Coming around seeing the finish line was such a relief!  The announcer talked about how it was my second race of the day, and I smiled, and then nearly crashed where the pro men finishing sprint had a mishap.  I dragged myself across the finish line to my parents’ cheers.  I’m so happy my parents made me get out of the truck, dammit!  1 hour 57 minutes of frozen wind hell for 5th place!

And that’s my Fat Bike National Championships!  Fun day, and especially fun for my parents who haven’t had the chance to see me race a lot, and definitely not fat biking related.  The races had some tough conditions, but I definitely felt my interest perk in future fat bike racing.  My Salsa Beargrease performed flawlessly, and I’m even more in love with the bike than I already was!  Big thanks to Acme Bicycles 307 for quickly getting the bike ordered and put together for me in time for the big race!  And of course there’s the whole big group of people to thank: Naked Women’s Racing (my team!), ESI Grips, Honey Stinger, Tailwind, and TrainerRoad!  Biggest thanks of all go to my parents who joined me on the trip and importantly made me do that pro race as they knew I would regret it if I didn’t start.