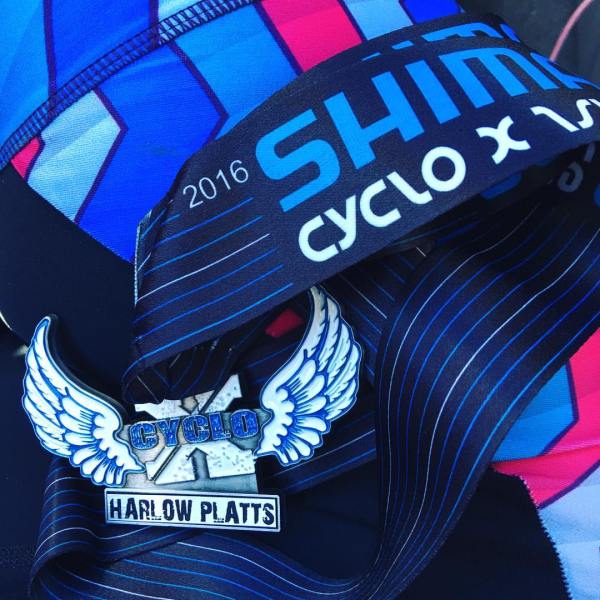 I’ve spent all year lamenting how horrible my race season has gone.  Then today after I won the women’s single speed race at the CycloX race at the infamous Harlow Platts venue, I realized that, holy crap, this has been a good year, all things considered!  2nd at Fat Bike Nationals.  5th place in my first NUE Marathon Series race.  3 wins and the overall title at the Laramie Mountain Bike Series.  National championship title at Hill Climb Nationals.  And what I feel is my first legit win in cyclocross.  Yeah, I burnt out.  I stopped training.  I got my ego kicked in Florida.  I got taken out in a road race and had a resulting pretty bad concussion and freshly discovered split bicep tendon.  But holy crap, it’s really been a good year!

BRAC decided to add in the SSW (single speed women) category to cyclocross this year.  At first I was hesitant about it, as I already get my ass kicked by cat 1 & 2 gals in cross, and didn’t exactly want to jump into another category for that, as most of the gals expressing interest are also SW Open racers.  I grew fond of racing the guys in SS4/5 last year as well, as it can be quite the funky bunch.  In August I did Adventure Cross, which is stupidly early to start cross racing, and I was the only one in SSW.  Win and dead last, all at the same time!  Hmm.  Since Without Limits/CycloX Series is running SSW and SS4/5 at the same time, I knew I’d have to decide on which one to race, and since SS4/5 is damn fast this year, I decided I’d settle into SSW for CycloX and try to double up SSW and SS4/5 for racers by other promoters.

Four of us would line up at Harlow Platts, which I found to be a damn hard course during my pre-ride.  Fun, but damn hard, especially for my seemingly stout 40×18 single speed gearing.  Grass courses aren’t really my favorite, but I did like how Harlow was very smooth (which is great for my shoulder).  There was about 5 or so separate sections of sand which I couldn’t quite clear entirely with my gearing.  Ugh, running in sand 😦  My favorite part is that the corners were grippy and I could pedal through them, which is important when you only got one gear.

Lining up I knew Megan and Kim would provide some stiff competition and I was nervous.  Whistle went off and I ended up taking the holeshot up a steep climb that would be a leg killing grind every lap.  Kim would get around me in the first sand section as she’s much more proficient at running with a bike.  I’d come through the first lap 3 seconds behind her.  I don’t remember when, but I would overtake her on the 2nd lap, and I just put the hammer down.  It hurt and I was drooling mucus all over everything (one guy actually told me “that’s gross” when I spit some out… lol!), but I forced myself up and out of the saddle, especially on the power climbs.  Only section I really struggled with were the uphill barriers which I just found impossible to run (I have long legs anyway so sometimes speed walking is actually faster for me).

After 5 grueling laps it was finally all over!  I finished 47 seconds ahead, woohoo!  Woo, that was hard!  But I was so excited!