I have a history with the Laramie Enduro.  Not necessarily a pleasant history, but a history.

Then came 2018.  I registered for it before my hysterectomy was scheduled in late April, but knew it was a fun course, and 31 miles isn’t that bad, especially with the other long races I’d have under my belt.  And I figured I would try to do halfway good.

So I showed up in much better spirits this year.  My fitness had slowly started to come around with some strong days on the road bike, and a surprise not-last-place finish at the final LMBS race of the year, which I raced on incredibly sore and tender legs from the Breck-32 and quad 14er hike I had done mere days before.  I let thoughts creep in about trying to make the podium, but knew I probably didn’t have that long MTB endurance it would take.

For the first time since 2013 I didn’t start in Wave 1, or “pro” wave.  I think this actually was better, as the pace was definitely a lot less crazy.  I tried to jump in a pace line for the first few miles of dirt road, but couldn’t hold it on some of the climbs as my legs struggled to warm up.  Luckily the extra weight I’m carrying means I’m kinda pretty fast on the downhills.

Due to all the recent rains, the course was muddy with some gigantic mud puddles.  I fretted over keeping my drivetrain in one piece, but otherwise had fun in the combination of mud, rain, and cow poop.

I was several miles in before any other wave 2 women caught up to me, which was surprising.  Unfortunately in this race it is really hard to tell who is full or half course racers, and also age groups, which was new for this year.  It makes things a mystery, but did provide some motivation for me to try to stay ahead as long as possible.  Eventually around the time of the hike a bike from hell (which I actually rode halfway up for the first time ever!) a Honey Stinger rider caught me, followed by Roxzanne, who I proceeded to creep on like I do everyone at races (that’s how I befriended my dear friend Lydia during the Gunnison Growler… “Are you Lydia Holmes” all creepy on a hill… ha!).  I tried to pace her for awhile, much to my delight (I’ll take pacing a national champion any day!), until I slipped my back wheel on a steep climb and had to come off the bike.

Overall the race continued to go well.  I was in good spirits and happy to just be racing, and to not have been swallowed by a million other women.  The dirt road portion that separates the Twin Mountain trails from Happy Jack was a bit obnoxious, but I rode with another guy and we chatted to pass the time.  Once I was in Happy Jack I definitely got more excited as I can ride all this stuff eyes closed!

Up, up, down, through more mud, and on and on I went.  I was pretty happy until the new re-route of Middle Aspen, which I found to be “enduro bro flow” stupidity and it soured me ever so slightly.  Luckily it wasn’t that long before I was on LiMBS and headed towards the final massive climb of the day up Haunted Forest.  Which took forever because I can’t climb anymore.  But I knew once I was on the top it was just a short jaunt up Brown’s Landing, then the one last climb on Death Crotch and I was free!

On Death Crotch I nearly cleared a rock feature that I have never even tried to ride before which was a bonus… and then I spotted a lost Garmin that I picked up.  I walked up the climb of Death Crotch because I simply didn’t feel the need to “prove” that I could ride it.  I actually rode Death Crotch kinda crappy, mostly due to fatigue.  Soon it was time to limp down Hooch… until the finish came into sight and then naturally, I stood and sprinted from the few racers behind me.  Kubo told me I was one of the few he saw do that.  Well, of course… I only have energy at the finish!

I finished in 3 hours 47 minutes and with a smile!

I really had no idea how I did, especially since there are multiple waves all timed differently.  I finally found a spot where I could pick up cell reception to check the live online results… and who would’ve thunk, I got 3rd!

Four tries, and I finally had a podium at the Laramie Enduro!  Woo hoo! 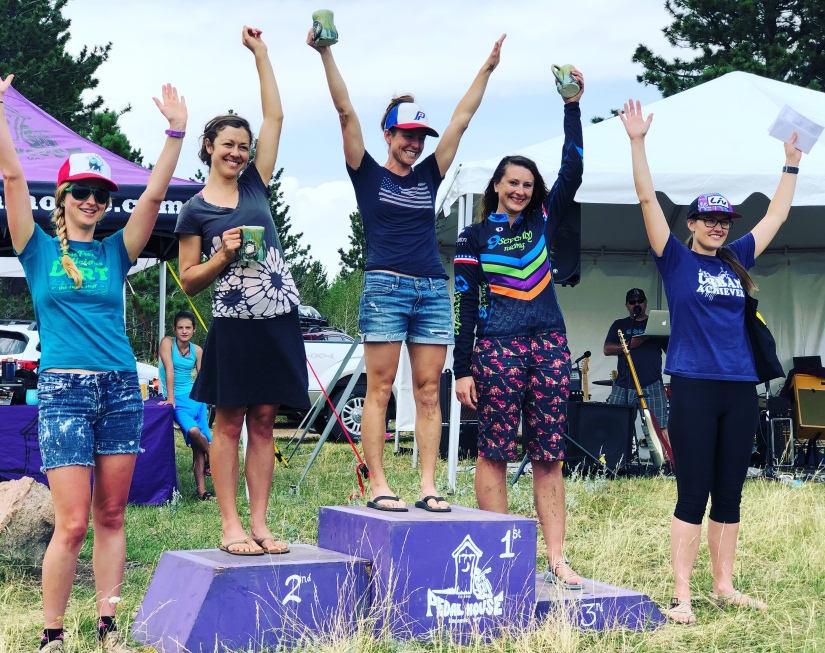 And with that… my 2018 mountain bike race season is over.  I know… it seems like it didn’t even have time to get started!  This summer went by damn fast!  I’m kinda sad that I worked so hard trying to get a bit of fitness back, and now it’s all over, but hopefully some carries over to cyclocross.

600 calories of Naked and Green Tea Tailwind Endurance Fuel in 2L of water.

And I did a horrible job at consuming it due to the cooler temperatures.  Luckily, like always, Tailwind had my back, though!