I use to blog every single one of my races, and slowly that has faded away over 7 or so odd years of bike racing.  I came to the realization that although I keep the CO/WY race calendar updated, and my race results page, I hadn’t otherwise written about anything since the Dead Swede.

Gowdy Grinder broke my heart.  Second place and I were right together when I snapped my chain about two or three miles into the race.  I ran (not sure why), continuing along the course until my friend Lydia caught me and helped get the chain back on enough I could get to the finish to DNF.  I handed off my bike to my mechanic, and went home and cried in the shower.  I knew I could’ve had such a great race once we got into the technical stuff where being a local is an advantage.  I give up on ever racing another Gowdy Grinder.

Laramie MTB Series started, and we had really weird run of weather with cold temperatures and rain.  I love rain and crappy conditions, so I rode to 1st place in Race #1 (yes, I actually raced against someone… they just didn’t call her up for podium), and 3rd place in race #2.  The rest of the LMBS series I toodled off the back of every race, struggling to push like 4mph.  Meh.  I would end up finishing third overall in the series, so I’m back on the open women’s overall podium.  Last time I was on it was in 2016 when I won the whole she-bang, so it was a reunion of sorts.

One of my “A” races for 2019 was the Bear Bait 8.  I first did this race last year as my first taste of an endurance solo event, and I loved the course so it was easy to sign up to give it another go.  My friend Wendy accompanied me to the race, which is always fun.  I really wanted to win, so I focused on hammering my first lap to build a lead, and then remain steady from there on out.  The first 4-5 hours of the race went by really fast, and I was way ahead of 2018’s pace.  Then my body realized it’s not built for racing for 8 hours, and I hopped on the struggle bus a bit.  I came through at 7 hours 45 minutes, completing my eighth lap, and debated going out on an nineth lap, but my back was fried.  Nonetheless, it was enough to secure the “W” and best of all, the biggest payout I’ve gotten at a race ($300!!). 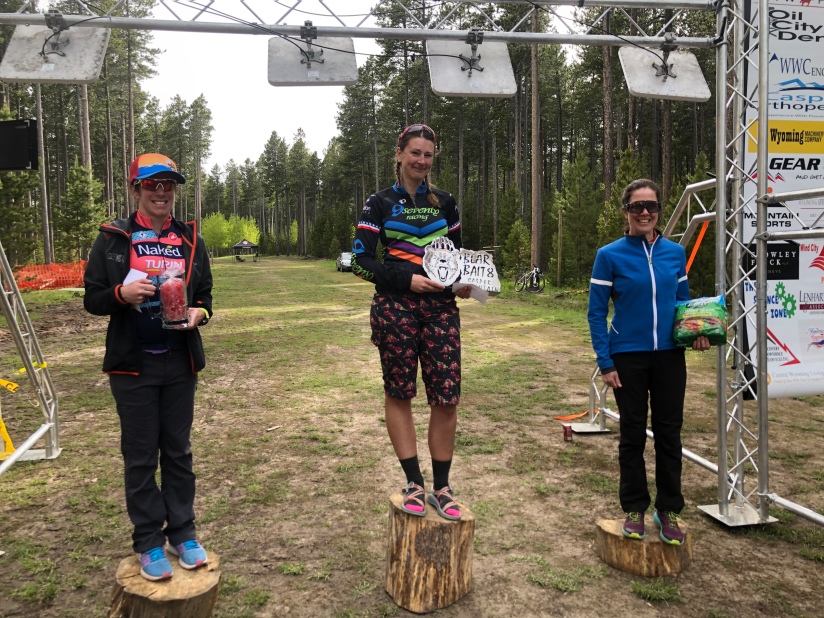 For whatever reason, after June ended I stopped riding my bike.  Great preparation going into the national championships, ha!  I registered for nationals just for the experience and the fact that Winter Park is mere hours from my house.  Surprisingly I found the course to not be as horrid as I was expecting, as the climbing is never too steep.  It was sorely lacking in technical terrain, but had enough tight, rooty, downhills to play to my advantages.

Cat 1 women started at 7:35am, and a start line crash happened near me in the field of 15, which I was able to swerve around, and I got a decent start on the first of three laps.  Once I hit the tight downhill single track I made several passes.  That would be the story… get passed on the climbs, drop ’em on the downhills.  I think I was as high as 7th place at times, and would settle for 10th after a good battle with the gal who ended up in 9th.  I was legit expecting to be last place at nationals (so did USAC’s race predictor…), so to finish in the Top 10 made me super happy.  Oh to race without expectations!

I had the Laramie Enduro… or Laramie Range Epic… whatever the name is now, the next day after nationals, which was just stupid (can you tell which one I registered for first?). This was my final “A” mountain bike race of the year, but I adjusted expectations when I stopped riding in July and decided on nationals. People were fast this year, and I wasn’t so fast.  I did take six minutes off my 2018 time, but instead of the podium, I landed in 5th.  So I immediately left, headed home to shower and to recover…

Because the next day was nationals short track.  Yes.  I made my own stage race apparently.

Short track at nationals was the race of “could’ve beens” as the course was exactly what would be awesome for me and my power curve, but alas the legs were toast after going couch-to-three-races-in-a-row.  Still, wasn’t last place, though I was so excited when I got pulled under the 80% rule.

And that was it.  I finished my mountain bike season on a Sunday at short track nationals, and started my cyclocross training plan on Tuesday.  Time to get to the fun stuff!

I still think I’m trying to figure out what I think about mountain bike racing.  Maybe it’s because I got stuck in a groove of always racing the same ol’ stuff year after year.  2020 just may be the first year that I do not spend Memorial Day weekend in Gunnison racing the Growler, which I have done since 2015.  Maybe it’s because I’m still working through my own feelings of dealing with not being as fast as I once was – well, as fast as I once was going uphill.  My descending has gotten faster and better every year, so I might have to play around with that (downhill at nationals anyone?).  So I shall see where 2020 takes me on the mountain bike!