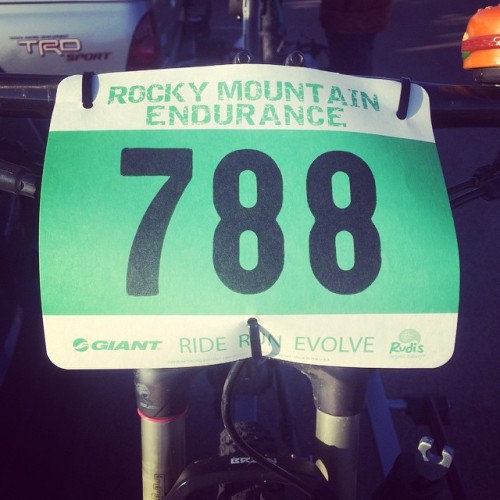 40 miles in.  Both big toes, but mainly the left one, so inflamed and painful any sort of pressure caused tears.  Blood trickling down from my right knee, with that leg smarting on every pedal stroke.  Mentally done.  I made all the big plans over the last couple of hours.  I’m done with mountain bike racing, it’s not fun anymore.  Stop with the coaching, stop with the training, stop with any race over my accustomed XC distance of 1.5 hours.  Take advantage of the refund insurance on my Leadville entry, downgrade my 40 in the Fort entry.  Yep, I was done.  No sense in doing something that hurts.  I’m too old for this stuff, the sore muscles, scars, bleeding, severe toe pain that makes me want to amputate my left foot.  Why do I do this again?  It’s not fun.  It hurts.  I’m done.

The shortest way back to my car is to just finish this damn race.  Granny gear, something I rarely use on my S-Works Fate.  I turned the pedals over and over.  I coasted.  Just get me back to my damn car so I can put my plan into motion.  No more mountain bike racing, especially of the endurance kind.  I’m done.  Stay upright on the stupid switchback that ripped the fresh scar tissue off my knee from my Seattle crash a month ago two laps go.  Turn the pedals.  Bobble, dabble on what was the easiest thing on the course for me – the long grindy steep climb on the “backside.”  Step down with the left foot and yelp in pain as the big toe makes contact with ground.  I’ve already been crying for the last 4 miles, but now it’s flowing as a worried spectator pulls my bike out of the way of other racers and offers me my empty water bottle, telling me to drink.  I grunt and point to the camelback hose.  I’m fine, I don’t need water.  I need off this damn course.  He tells me to sit with him and his daughter, to clear my mind and get collected.  I look into his eyes like a scared animal and mumble I can’t, I must keep moving.  I knew stopping would be the nail in the coffin.  Three miles, mostly downhill, and downhill calm enough that I can sit, not stand on the left foot.  Remount, and he pushes me off.

RME Ridgeline Rampage.  One of my first mountain bike races back when I got all gungho about mountain bike races.  I did the 10 mile race back then, and won my category by being the only one who showed up.  This year I decided to race the 50 mile because, well, I need to get use to these long distances.  How bad could it really be, right?  I decided on age group, no pro.  My excuse being this is my second endurance race ever, and the first one I planned on finishing, so definitely not pro level.  I knew pacing would be tough.  I can kick ass in 1.5 hours.  The possibility of 5 hours?  Not so much.

The start was tame, nothing crazy.  Teammate Michelle and I were out front.  We had a long starting loop up a bike path to the single track.  I hit the single track in first place overall and set a decently fast pace.  I honestly didn’t know what pace I should go, so I just went fast.  Probably 80% of my XC pace.  No one was trying to pass, so I enjoyed having wide open trails for the punchy hellish climbs and sketchy descents of loose-over-hardpack.  About two-thirds through the first of 5 ten mile laps the other gal in my age group, Rachel, whipped around me and took off like it was a 10 mile race, not a 50 mile race.  So I stayed in 2nd place overall through about 15 miles into the race when a 40-49 age group gal asked if I wanted her to pull and then took off like crazy.  Crazy 40-49’ers.  But the race was going ok, I was climbing well and felt ok.  I made sure to keep spinning the legs on some of the stuff you can just coast on to keep the lactic acid from building up and stop any cramps.  My stomach had already started growling which I knew was bad.  Two other 40-49’ers passed me to go catch Christine that went off the front.  Yay, finally alone on the trail, aside from the pro men who were already lapping us.

Ate a gel on the third lap and pedaled along.  On a downhill switchback a half second lapse in bike control and I started falling over, stuck out the right leg, and it buckled and my knee smashed into a rock.  Blood instantly started trickling down.  I swore.  Arghhh.  Jeff Kerkove comes flying around the corner, and then I get ready to remount and realized my chain is off the front rings.  Wrestle it back on as I see Michelle flying down the descent.  Manage to get going as she catches me.  I think she asks if I’m OK, and I honestly don’t know what I said.  I’m not sure I knew.  Fourth lap, another gel and just pedaled along.  It’s starting to suck.  The toes are hurting badly.  The same pain I’ve been dealing with for years since I’ve started riding, but with my increasingly bad attitude starting to creep in, it’s harder to ignore the pain.

Fifth lap.  Final 10 miles of torture.  Michelle latches onto me for good as I’m trying to wrangle a gel wrapper into my back pocket.  Granny gear everything.  I’m done.  It’s a death march.  I hate life, I hate everything.  I finally told Michelle to go.  She’s so fast on the descents and I was just cooked.  I can’t stand, if I do the pain is horrendous.  Becky, who had a nasty wreck 5 miles in, finally catches me and encourages to try different shoes, and tells me my feet are swelling.  She goes around, blood spewing from her right elbow.  I’m just wanting to survive.

Survive I did.  5 hours and 2 minutes.  I lost quite a bit of time on the final lap, my slowest lap by 7 minutes over the next slowest.  Becky was at the finish line and I gave her a hug and thanked her for trying to encourage me even though I wasn’t having any of it at that moment.  And then advised her she probably needed stitches!  Realizing awards were slated for 1:30 and it was 1:20, I rolled back to the parking lot which luckily was downhill since my left foot was still useless.  Since there were a whole two of us in the age group I would place 2nd, so might as well show up for the podium, right?  I hobbled over for my free lunch which I barely picked at and sat around with Joan, Michelle, and Megan.  Awards were delayed, which meant I could’ve cleaned up after all, but instead I sat in the grass poking at my blood and dirt covered knee and trying to ignore the left big toe which was still screaming in my shoe.

I was going to leave, but decided that it was worth sticking around to cheer for my friends in the XC race.  I cleaned up and walked up to the feed zone and got to see Elizabeth, Suzie, and Wendy, and talked with my coach who called me.  Wendy, her husband, and I then went and pigged out at Outback Steakhouse, though I’m sure there’s no way I made up the 3700 calorie deficit from the race!  Once I was home I cleaned out the knee and realized that yep, the scar tissue was torn away and was just a flap – neosporin and a bandaid was slapped on top of it.  I was too tired to deal with what I should do with the dead flap of scar tissue.  I got in bed, exhausted, but my toe was throbbing so much I couldn’t sleep.  Finally took some 800mg ibuprofen and slept until 10am.  Ahhhhhh.

I feel like hell today.  My back is all tight and sore.  I haven’t bothered to take the bandaid off my knee to see the gooey mess that is probably waiting for me.  It’s raining off and on, and I’m tempted to go spin in the rain on the cross bike for a bit.  I’m suppose to do a 3 hour ride, but it’s not happening.  I figure if I pedal at all it’ll be a victory.

This race was the lowest of lows I’ve reached mentally.  But I still finished, which means I must be overcoming something if I can be lower than “2013 Laramie Enduro Low” and still finish a race.  I am worried a lot about the toe issue going on.  There’s no way I can even comprehend 100 miles with that sort of pain as I know what it can do to me during 12, 30, 50 mile races.  I plan on talking to Pat at Bicycle Station about possible fit adjustments (that won’t anger the knees), and then maybe an orthopedic doctor.  I think it’s nerve related, but I don’t know.  I just don’t like to hurt.

Just keep moving.  It’s only April.  I have 3.5 months to trick my body into an endurance mindset.  Ridgeline Rampage was a lesson learned… pacing, nutrition, controlling the mental cascade of negative thoughts.